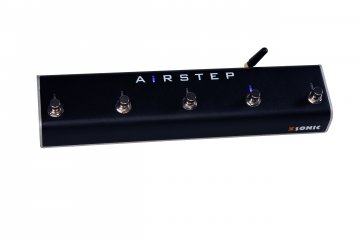 From Now On, You Only Need One Controller

AIRSTEP can wirelessly control software on mobile phones, tablets, and computers via Bluetooth MIDI and HID. Like effect software, Plugin, DAW, etc. It can even control the play/pause, backward and forward of YouTube guitar lessons, page-turning of the music score, completely freeing your hands!

AIRSTEP has 5 footswitches, and can wirelessly expand 5 more footswitches by AIRSTEP Lite. It is capable of sending up to 8 different messages per switch. All functions can be easily set by the AIRSTEP APP. Programming and editing isn't your thing? Just load any of the massive online presets with just one click, truly plug and play!

AIRSTEP is powered by a built-in rechargeable battery, no external power supply is required. Its compact footprint and sturdy metal casing are built to meet the most stringent environments faced by musicians.

AIRSTEP has a comprehensive and powerful MIDI control function. From 2 5-Pin MIDI interfaces to USB and Bluetooth MIDI interface, It can control all things related to MIDI, whether it's hardware or software. It can be placed everywhere you want, to rule your home studio and live gig, with its compact size to put in your guitar bag or backpack.

AIRSTEP can send all types of MIDI messages: Control Change, Program Change, Note On/Off, SysEx, System Real-Time, etc. It can send up to 8 different MIDI messages with just one press, or release, or long-press. All of the messages can be easily edited by the AIRSTEP APP. You can edit and save your own presets, there is no limitation of the preset amount in the APP. When you need to use them, just one click to load and enjoy! Moreover, massive online factory presets have been built into the APP and will be kept updating. So, if you don't want to program the MIDI, you can also find most of your needs in these online factory presets.

Be Your Computer Keyboard

AIRSTEP can send HID messages to mobile phones, tablets, and computers. HID messages are messages sent by the computer keyboard, so you can use it as a wireless keyboard placed on the floor. You can assign any key of the keyboard to AIRSTEP's footswitches. When you are playing guitar while watching YouTube lessons, music scores, covering songs, or recording with DAW, you always have to stop and use your hands to click the keyboard or screen. Now, free your hands with AIRSTEP! You can also use it to control the phone's video or camera functions. What if you don't have enough hands when you playing a game? With AIRSTEP, use your feet! What a keyboard can do, AIRSTEP can do it all. Also, up to 8 different HID messages can be sent by one press, or release, or long-press.

AIRSTEP can be used as a traditional footswitch to control amps or pedals with the footswitch(TRS) control input. AIRSTEP supports both momentary and latching type, and two TRS outputs mean AIRSTEP can control up to 4 amps or pedals with a footswitch(TRS) control input. Therefore, it can be used as a powerful traditional footswitch to switch amp channels, toggle function of pedals, tap tempo, even control the sustain function of keyboard instruments. These functions are fully programmable by AIRSTEP APP. You can map them freely, together with up to 8 messages sending feature. It can switch the channel of your amp by FS control and toggle pedals with MIDI control at the same time!

AIRSTEP has 5 footswitches, each footswitch can send up to 8 different messages to the specified output interfaces at the same time, and the output message type can be any combination of MIDI, HID, and traditional footswitch messages. AIRSTEP has 3 trigger actions of footswitch: press, release, and long press. Each trigger can be assigned different message outputs. You can short press the footswitch to toggle the delay, long-press the same footswitch to change presets, or you can press and hold to enable the boost, and release to disable it. Footswitches can also be set as toggle mode. In toggle mode, the first trigger and the second trigger send different messages. All these parameters can be easily edited and saved by the AIRSTEP APP.

AIRSTEP Lite is the simplified version of AIRSTEP, it has removed all hardware control interfaces and only kept the Bluetooth to send MIDI and HID messages. This means that Lite can only connect to mobile phones, tablets, and computers to control software, but cannot control hardware devices. In addition to this, the other functions of Lite are the same as AIRSTEP. However, Lite can not only be used independently but can also be used as AIRSTEP's wireless extension footswitches. Lite can wirelessly control all wired devices connected to AIRSTEP. So you can own both AIRSTEP and AIRSTEP Lite without worrying about the duplication of functions.

All the parameters on AIRSTEP are edited by mobile APP via Bluetooth, which is the most ultimate intuitive and convenient way for editing. APP shows the working status such as footswitch function, preset position, battery status, etc, and all parameters can be saved as presets. There is no limitation of the preset amount in the APP. It doesn't matter if you don't want to program, the APP provides massive online presets, which can already control most of your devices and software. If you want a more flexible control function, APP also provides a highly customizable setting interface to meet your most demanding needs. AIRSTEP can store 5 most commonly used presets locally, which can be used when not connected to the APP. Search AIRSTEP in the APP Store or Google Play to explore it!

USB HOST is a unique function of AIRSTEP. In this mode, AIRSTEP's USB interface is equivalent to the USB on the computer. It means that you can plug-in devices that can be controlled by the computer. Many hardware effects only have a USB port, which is only controlled by a computer, like the ZOOM MS Series, now you can use AIRSTEP to extend more footswitches for them. You can also plug in your USB MIDI controller to AIRSTEP, it will power the controller directly, and forward MIDI messages to Bluetooth, then, your controller becomes wireless.

MIDI trigger is another advanced function of AIRSTEP. All the MIDI input of AIRSTEP including 5-Pin, USB, Bluetooth can receive up to 8 specific MIDI messages, which are triggered when these specific messages are received. The MIDI trigger can realize the same message output functionality as the footswitch of AIRSTEP, it can send up to 8 different assignable MIDI, HID, and footswitch out messages when triggered. For example, you can connect a traditional MIDI pedal to AIRSTEP and turn it into a wireless computer keyboard to send HID messages. This allows you can use your traditional MIDI pedal to extend the footswitch of AIRSTEP.

Connect All Your Devices Features

√ Send all types of HID messages via Bluetooth

√ Send footswitch actions to devices with the footswitch control input

√ Send up to 8 different messages with one trigger

√ Toggle mode of the footswitch and LED indicator

√ All MIDI in can thru to all MIDI out

√ 300 hours of wireless freedom between charges

√ Firmware can be upgraded via mobile phone